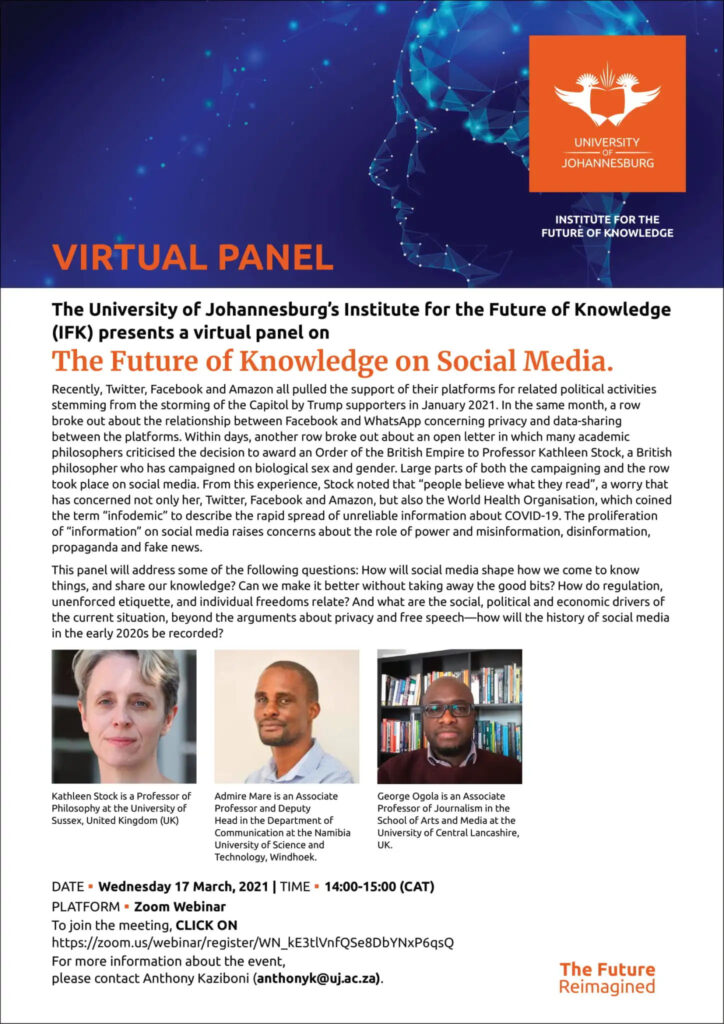 Recently, Twitter, Facebook and Amazon all pulled the support of their platforms for related political activities stemming from the storming of the Capitol by Trump supporters in January 2021. In the same month, a row broke out about the relationship between Facebook and WhatsApp concerning privacy and data-sharing between the platforms. Within days, another row broke out about an open letter in which many academic philosophers criticised the decision to award an Order of the British Empire to Professor Kathleen Stock, a British philosopher who has campaigned on biological sex and gender. Large parts of both the campaigning and the row took place on social media. From this experience, Stock noted that “people believe what they read”, a worry that has concerned not only her, Twitter, Facebook and Amazon, but also the World Health Organisation, which coined the term “infodemic” to describe the rapid spread of unreliable information about COVID-19. The proliferation of “information” on social media raises concerns about the role of power and misinformation, disinformation, propaganda and fake news. This panel addressed some of the following questions: How will social media shape how we come to know things, and share our knowledge? Can we make it better without taking away the good bits? How do regulation, unenforced etiquette, and individual freedoms relate? And what are the social, political and economic drivers of the current situation, beyond the arguments about privacy and free speech—how will the history of social media in the early 2020s be recorded? The discussion was moderated by Professor Alex Broadbent, and the speakers were: Professor Kathleen Stock, Professor of Philosophy at the University of Sussex, United Kingdom; Professor Admire Mare, Deputy Head in the Department of Communication at the Namibia University of Science and Technology, Windhoek; and Professor George Ogola is an Associate Professor of Journalism in the School of Arts and Media at the University of Central Lancashire, UK.

NextPublic Lecture: Work of the Future: Where Will it Come From?Next 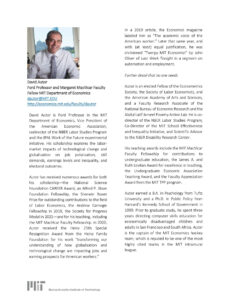 More info – Public Lecture: Work of the Future: Where Will it Come From? 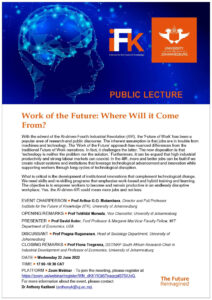 Public Lecture: Work of the Future: Where Will it Come From? 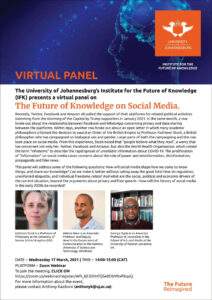 More info – Public Lecture: Work of the Future: Where Will it Come From?

Public Lecture: Work of the Future: Where Will it Come From?